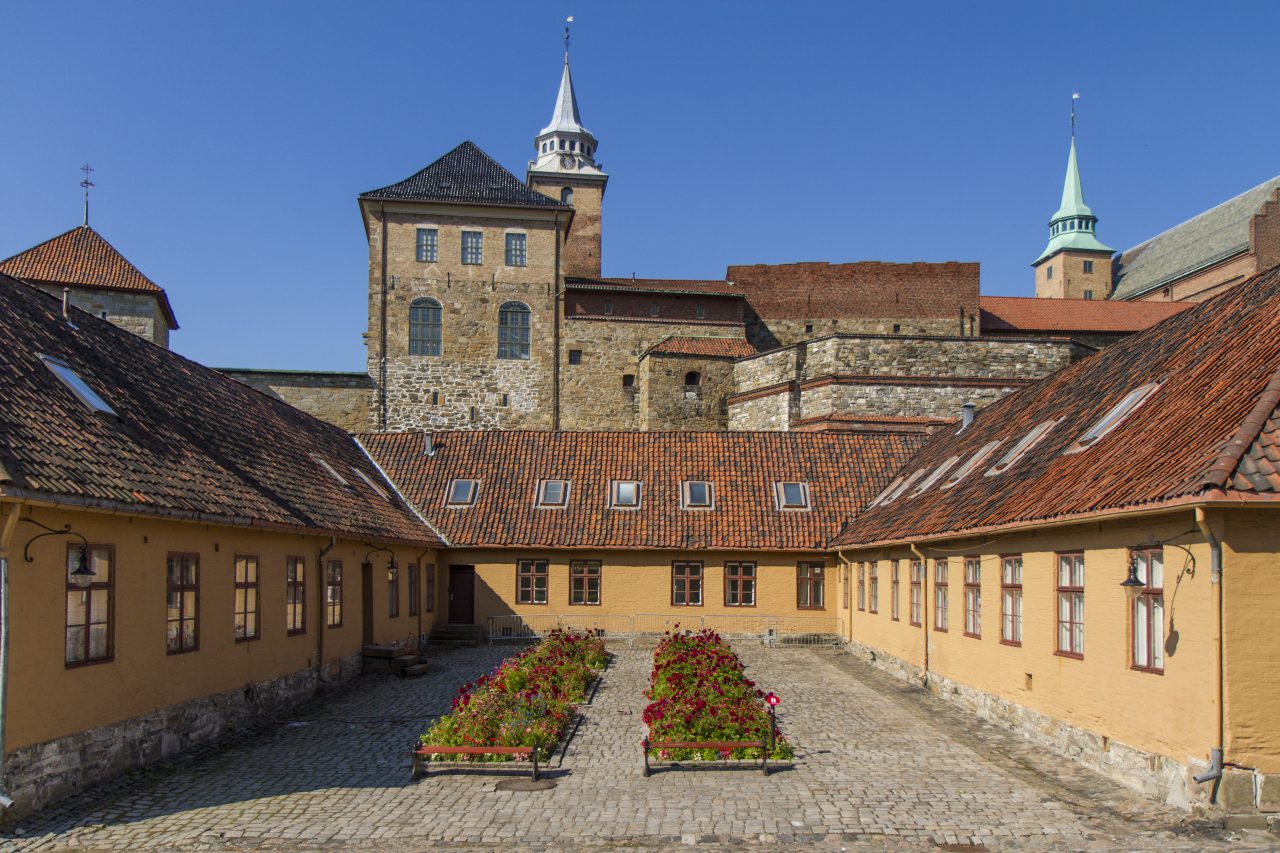 In Oslo, Norway, you can find an impressive stronghold named Akershus Castle. The castle is located near the harbor and used to be of great importance to this European country. Akershus Castle, or Akershus Slott og Festnung, was built at the end of the 13th century to protect Oslo against enemies from the outside as well as from the inside. It is also rumored to be the most haunted building in Norway.

The history of Akershus Castle

King Håkon V started building the castle in 1290 to replace the weaker castles Tønsberg and Båhus. Akershus Castle was built in reaction to earlier attacks on Oslo by the Norwegian nobleman Earl Alv Erlingsson of Sarpsborg. The fortress endured many sieges successfully and earned the title of most invincible European castle. Most sieges came from Sweden, who wanted to claim Norway in order to become one big Scandinavian nation.

They tried 8 times but never succeeded. At the beginning of the 17th century, the castle was renovated and modernized into a Renaissance castle. This happened during the reign of King Christian IV. Akershus Castle is also the final resting place for many Norwegian Royals like King Håkon VII, Queen Maud and King Sigurd I. And did I mention it was huge? It has 67 buildings and is as big as 14 soccer fields.

Akershus Castle is built near the Oslofjord, which is a very important, strategical position. Not only is it perfectly located for the Norwegian Navy, but for the trade as well. But there was an even more important side to it; whoever owned the castle automatically ruled Norway.

Akershus Castle was also an infamous prison. The Norwegian Robin Hood, Ole Høiland (1797 – 1848), committed suicide in his prison cell at the castle. He was well known for his escapes (no less than 11 times!) and his spectacular robbery of the Norwegian Bank in 1835. He even escaped Akershus once, but he was locked back in three years later. Apparently, that was too much for him. A part of the prison is known as the Slaveriet, what means Slavery. The prisoners in this part of the castle had to put up with extreme hard labor. Many of them died during their imprisonment because of this.

Akershus Castle was never sieged by a foreign enemy until the Germans took over in 1940. The castle was surrendered without a fight. During WWII, several people were executed at the castle. Akershus was liberated May 11, 1945. After that, 8 Norwegian traitors, amongst them political leader Vidkun Quisling, were executed on the castle’s grounds. Quisling wanted Germany to take over Norway because he felt connected to the Nazi’s. Akershus was chosen as execution location to make a statement to the rest of the world.

The ghosts of Akershus

Looking at the castle’s history, it’s not surprising it is haunted. Many visitors and employees claim to have experienced something they cannot declare. Most of the paranormal occurrences are the common phenomena: people hear footsteps, disembodied voices and smell strange smells. But there are some claims that have been around for centuries.

All castles have their weak spots, however strong they seem. For Akershus this was the Main Gate. Gatekeeper Garshol came up with a plan to keep the enemies away. He buried a guard dog at the Main Gate. The creepy part about this is that the dog was buried alive. The guard dog returned as a vengeful ghost dog. Soldiers were terrified of this “Malcanisen” which is Norwegian for “Vicious Dog”. Once bitten by this dog, you were bound to die within three months. Of course, in a very unhappy and painful way, probably with the help of a couple of Norwegian warriors. The dog is buried at the Maiden Tower, so if you visit Akershus remember to beware of the dog.

For decades people claim to have seen a woman appear from the darkness at the Margaretasalen. She wears a long, dark cloak and has no face. She is called the Mantelgeisten (cloaked ghost) and she is seen very often.

The Malcanisen and Mantelgeisten are not the only ghosts of Akershus. At the drawbridge, people claim to hear screams as if a battle takes place and some even claim they feel somebody breathing down their neck. This is supposed to be the ghost of the old gatekeeper. A drunken Swedish man once stormed the castle with his horse. He was screaming that he was taking over Norway. He and his horse were both shot at the gate. Even since, the horse (not the man) haunts the premises, scaring everybody half to death. The Virgin Tower, the highest tower of Akershus, is loaded with ghosts.

Akershus Castle still is a military base, but it is also open to the public. Today, more than 900 people work at the castle. You can also book a ghost tour. It’s a beautiful fortress so if you have the chance to visit, then do! You’ll learn more of the Norwegian history and perhaps even encounter a spirit or two.

The breathtaking medieval Burg Eltz, or Eltz Castle, can be found in the hills of the German town Wierschem, between Koblenz and Trier. Burg Eltz is one of the few castles in the area that was never destroyed during a siege and it can be visited today. This castle used to be the home of […]
Everybody knows the Legend of King Arthur. Even today, people are trying to find evidence of the existence of this once powerful King. Perhaps you think his story only ties to England, but this story will tell you otherwise. The cradle of King Arthur’s legend is in Brittany, France, in a mysterious forest called Fôret […]
Woodchester Mansion can be found in Woodchester Park, near Nympsfield, Gloucestershire, England. It’s a desolate mansion, built on the spot where once another mansion stood. Although the house looks grand, it’s far from finished in the inside. Woodchester Mansion, in the middle of beautiful lakes and nature, is perhaps England’s scariest haunted house.   The history […]
In the north of Chile, in the dry Atacama Desert, you can find the mining towns Humberstone and La Noria. They were founded because saltpeter was discovered in the desert and soon more of these so-called “nitrate towns” were built. But the fairytale didn’t last long, and the towns were abandoned. But that doesn’t mean […]